When we were looking for a name for the firm, we wanted something that spoke to the heart of what we are about: high-impact, success-changing, life-changing human development. In the end, we went back to the beginning, to one of the first questions our founders ever asked about human development.

And we called the firm fiveDlearning….

Simple questions can be powerful. More than 40 years ago, one of our founders asked a distinguished education leader “what are the universal learning competencies that, if any school anywhere on earth delivers them effectively to its students, that school’s stakeholders will say ‘you’ve done everything that you can reasonably do to prepare those students to succeed in school and in life’?” The leader didn’t have a good answer. No one else did, either. Thirty years and more than 18,000 research studies of educational improvement efforts later, we are beginning to have an adequate answer to that question. The answer is not simple, but it turns out to be extraordinarily powerful. It involves five key dimensions of learner success.

Let’s show the five dimensions first, define them, and then discuss where they come from, what they mean, how they inter-relate, and their implications for learner success. Here are the five, in Figure 1, below: 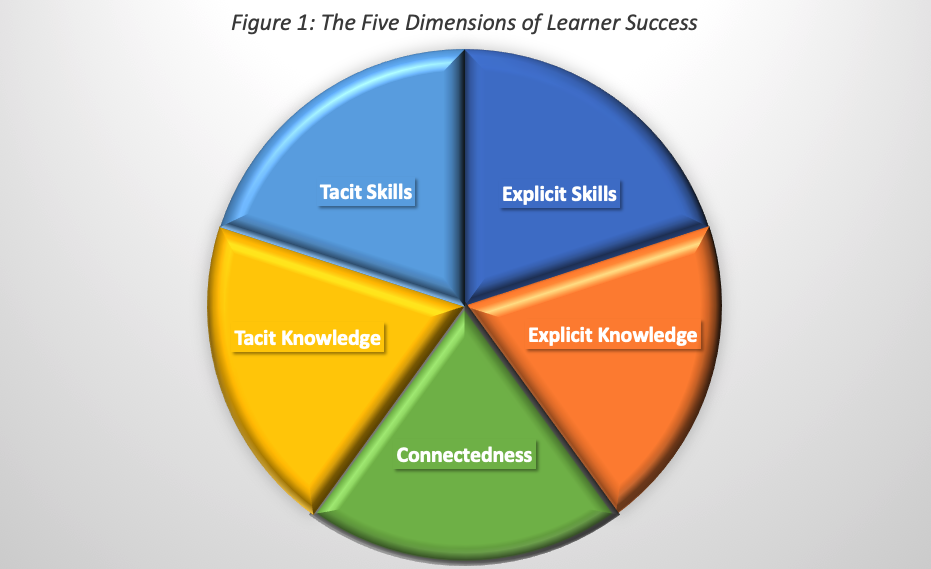 Explicit Skills are skills learned formally in school. Basic, general examples include reading, writing, and arithmetic, as well as penmanship, how to write a homework assignment, and so on. More specialized examples include computer programming, welding, cooking, and thousands of others.

Explicit Knowledge is that one learns formally in school. Examples include historical or political facts, scientific facts such as the multiplication tables and elements of the periodic table, and simple and advanced understandings of how the world works.

Tacit Knowledge is general and field-specific knowledge held by every successful person in a field that was not learned formally. Examples may include knowing what are the best-paying professions or those with the best work-life balance, which are the top firms in a particular field, and so on.

Tacit Skills are, like tacit knowledge, held by every successful person in a field but not taught formally. Examples may include knowing how to write an effective memo, to interview or ask for a raise successfully, career management skills, and even critical thinking skills (more about this below).

Connectedness is a measure of how well-engaged a person is with the people in his or her personal and professional environment. In every culture worldwide, well-connected people succeed further and faster, fall less often, and when they do fall, recover faster and more fully than those who are less well-connected personally and professionally. Another way to understand connectedness is that it is the set of knowledge and skills required to build, sustain, and use trust relationships with others.

Where do the 5Ds come from? Over the past 30 years, our founders and diverse colleagues and collaborators have performed and meta-analyzed studies of educational improvement culled from around the globe (in all, more than 18,000 studies from more than 60 nations, representing every populated continent). We were looking for universal success-factors: the things that made a positive difference for learners in every kind of diverse educational environment. We concluded early that there is no single, simple set of knowledge and skills that truly universal: cultures and contexts are just too different. (Consider, for example, that writing is a nearly universal skill—except among visually disabled people and except for the non-trivial detail that people write in hundreds of different, mutually incomprehensible languages using dozens of scripts.) However, there are universal categories of knowledge and skills—categories that are much more similar across cultures than they are internally different. Those categories became our five dimensions.

Four of the categories were easy to identify. Educators focus almost all their work on teaching formal skills and knowledge: we renamed these categories ‘explicit’ because they can be found explicitly in course syllabi, learning materials, and so on. Similarly, ‘tacit’ skills and knowledge are also widely recognized as important. Some educators call tacit skills “soft skills,” which emphasizes their emotional and social instead of cognitive qualities, but we prefer ‘tacit’ because we are interested more in where and how skills are acquired than in their intrinsic qualities. Tacit knowledge is less often acknowledged by educators, but it’s visible easily if one wants to look for it. For example, even in the field of education itself, there are things successful educators know that others (less-successful educators and non-educators alike) don’t know, and which the successful ones never learned in a class. That’s true in every other field as well, from law and medicine to housecleaning and bus-driving.

The most challenging category to identify was ‘connectedness.’ Initially, we believed we needed to address the issue of individualism. Globally, cultures range from highly individualistic to highly communitarian. We wanted to understand what universal if any, underlay these cultural differences. That proved very because it turns out that competencies that prepare one to succeed in an individualistic culture like the US tend to harm one’s success in more communitarian societies like China, and vice versa. After more than 5 years of effort, we finally realized that we needed to flip the question. Cultures may vary widely on measures of individualism but they are united in the advantages they give to well-connected people. Once we realized that we were looking for connectedness rather than individualism as a universal category, our work came together quickly.

How are the dimensions conceptually? Explicit skills and knowledge are both taught formally and are both primarily cognitive in nature. Tacit skills and knowledge are both taught less formally and are social and emotional in nature. Connectedness is a “bridge” category, in that it combines both cognitive (who’s got power or authority) and social-emotional (how does one build trustful connections) elements. See Figure 2, below. 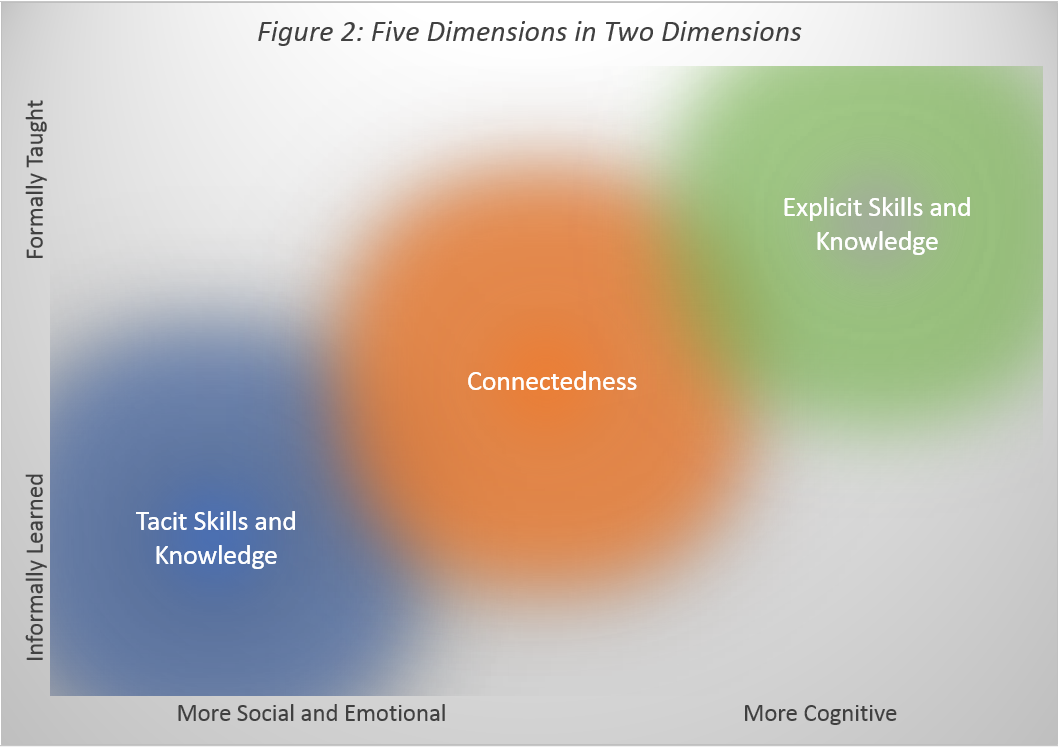 By “formally,” we mean “in a lesson in a school.” When we say something is taught informally, we don’t mean that there is no instruction or intent to instruct. We mean only that the instruction occurs outside formal schooling. Most tacit skills and knowledge are taught intentionally by other social institutions, the family; religious institutions; social institutions such as scouting or Red Cross/Red Crescent; and co-curricular and extra-curricular school experiences such as athletics, student government, and affinity clubs. Some tacit skills and knowledge are also learned purely informally, through friends, acquaintances, and relatives. For example, an uncle or a friend’s mother who is a successful attorney may teach a future attorney many things, maybe unknowingly, about how to be a successful attorney someday.

Why does this formal/informal distinction matter? At their best, schools work as social levelers. Students come from any family background, receive—ideally—the same preparation, and are given the same opportunity to succeed. If schools could teach everything that anyone needs to succeed, the system would work well. Unfortunately, today’s real-world schools teach only a subset of what’s needed to succeed even in that school, let alone in life after school, so students must learn the rest outside class. If they can find the other learning they need, they succeed; if they cannot, they fail. That’s why “under-prepared” students struggle and fail—not because they’re less smart or less hard-working in class but because the schools don’t give them what they need to overcome their deficits in preparation.

In most nations, secondary and postsecondary schools concentrate on cognitive, explicit skills and knowledge. Tacit, social and emotional skills knowledge may be taught explicitly in earlier grades, but by middle school (ages 12 and up) those topics have been replaced by specialized, cognitive topics like algebra, programming, cooking, and so on. From that moment on, students whose out-of-school social institutions and contexts do not keep pace in teaching them the right tacit knowledge and skills start to struggle and fail.

Access to social institutions isn’t equal in any society, and it is often extremely uneven. In general, is the single strongest teacher of tacit skills and knowledge—and in any society, family resources are generally more uneven than those of other social institutions. Wealthy students and those from elite backgrounds have much better access and therefore tend to develop much better inventories of social and emotional skills. If one’s family includes many members who have succeeded at a certain educational level, one will be well-equipped with the tacit skills and knowledge needed to succeed. On the other hand, if one’s family has no one experienced with college-going (making one a “first-generation” college-goer), then even the most basic experiences, such as applying for admission and registering for courses, may be impossible to navigate. First-generation college-goers may not learn that this knowledge and these skills exist until it is too late.

In the US and other G7 nations, perhaps 30% of the population qualifies as under-prepared in terms of one or more of the five dimensions. This means that they lack to social institutions that sustain and support school success. By far the largest subset of under-prepared students are those who are “first generation” students; that is, they lack access to family support for schooling at their levels. Thirty percent is a significant number, and where these students are concentrated, G7 school systems struggle to achieve consistent student success.

By comparison, in an emerging or developing economy universal education is recent or may still not be fully realized, so almost every student is a first-generation student if they proceed far enough. In many emerging and developing economies, 80%-95% or more of college students may be first-generation, so almost every college has a majority under-prepared population. This has tremendous, negative consequences for the success that those students and their adequately prepared peers can hope to achieve.

Emerging and developing economies may also lack some or all of the other social institutions to prepare students adequately. All have religious institutions, but their focus on learning varies widely. Many don’t have social institutions like scouting except in elite areas, and many can’t afford co-curricular or extra-curricular activities even if their students were able to attend instead of working to survive. When their families cannot fill the gaps in their preparation, students in these nations have nowhere else to turn. In summary, the rich, out-of-school institutional environment that supports learner success in G7 nations is under-developed or absent, so under-prepared students have fewer places to turn to receive the additional support they need.

Therefore, if an emerging or developing economy wants its education system to deliver equal or better performance than a G7 education system, it cannot merely duplicate a G7 approach. Instead, it must address all of the deficits its students bring to their educational experiences. It must identify the missing tacit skills and knowledge and incorporate them explicitly into the educational experience. And it must become intentional about teaching under-prepared students how to connect successfully into their societies and the world of work.

Overcoming these deficits is a huge effort, and it needs to start somewhere. For us, it starts with the five “Ds.” By looking closely at learners’ needs in each dimension and comparing them to what is taught, education systems in emerging and developing economies can begin to close the deficit gaps that prevent large numbers of their students from thriving. They can turn tacit knowledge and skills into explicit knowledge and skills, giving every learner a good, fair chance at success in school and in life.

That’s why the five Ds are important. That’s why we named our firm fiveDlearning.

We welcome your thoughts and comments below. Interested in learning more? Please drop us a note at info@fivedlearning.com.